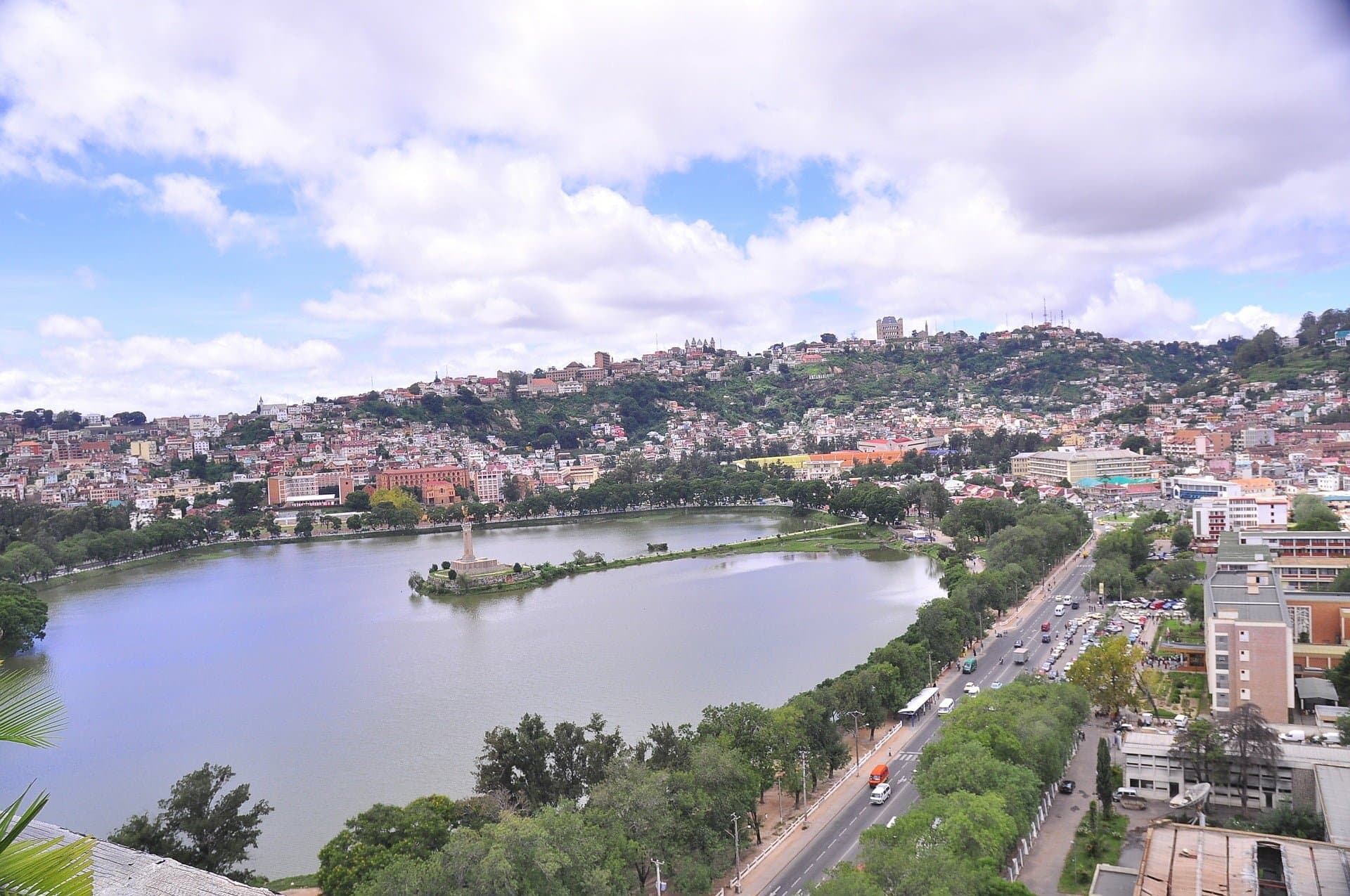 THE HIGHLANDS:
1) ANTANANARIVO
Antananarivo (Tana) is the nation’s capital. The ethnic group residing in Antananarivo is the Merina ethnic group. Ten percent of the population of Madagascar is in Antananarivo, that is to say 1.7 million inhabitants.
Historically, the city was built on twelve sacred hills of which the Royal Palace is on the top of a hill, such as the Palace of Ambohimanga and the famous Queen’s Palace called the Rova of Antananarivo.
It is also a city with a low concentration including Analakely (downtown with a beautiful boulevard with Independence Avenue ending at the station), Ambohijatovo and Mahamasina.
The secondary towns are Antaninarenina where we find the presidential office, Andohalo (place du Rova) and Faravohitra. On the hill, you can see the ruins of the Queen’s palace called “ROVA”.
Antananarivo has two distinct seasons: the dry season and the rainy season.
The dry season is from May to September, temperatures are very cool between June and August, while the rainy season starts in October until April. WHAT TO SEE AND DO?

The “Rova” (Queen’s Palace).
The capital offers us many interesting places, including the “Rova” where you could enjoy a panoramic view of the whole city.
From the 17th to the 19th century, the “Rova” was the habitual residence of Kings and Queens. Furthermore, it was also once known as the spiritual center of the Merina people. It was burnt down on November 6, 1995 but is now being restored little by little. THE PRIME MINISTER’S PALACE (Andafiavaratra Palace)
It was once the residence of ex-Prime Minister Rainilaiarivony who married three queens. Now it is a museum which houses some precious objects saved from the Rova holocaust.

THE ZOO and the BOTANICAL GARDEN OF TSIMBAZAZA
The Botanical Garden of Tsimbazaza is famous because the fauna and flora of Madagascar are preserved there and you can also see selected endemic species. There is also an excellent museum that allows you to better know the island, bones of prehistoric animals and traditions. All this could give you an image of the richness of Malagasy civilization. The Botanical Garden is easily accessible and allows you to meet a large number of birds, skeletons of extinct animals and several species of giant lemurs and the famous elephant bird. THE CROCODILE FARM named CROC FARM
The farm is a few miles from the airport. It is a private park that specializes in breeding crocodiles for crocodile skin products and meat.

THE ARTISAN MARKET
As far as craftsmanship is concerned, the Malagasy people are the most gifted people in the world. Tourists spend their last Ariary before returning to the Artisanal Market of the “Route Digue” where you can treat yourself to beautiful embroidery, basketry, wood carving, minerals, leather and Antemoro paper. Many shops are located in the city or in the surrounding area. They offer unique and high quality items. Some markets are held in the Andravoahangy district on Wednesdays.

2) NORTHEAST
EXCURSION to Ambohimanga Rova (King’s Palace or Ambohimanga Rova).
Ambohimanga Rova is located 21 km northeast of Antananarivo. The fist king called Andriambelomasina who established himself in 1730 was the grandfather of King Andrianampoinimerina who was the first king to establish the palace of Ambohimanga. All the monarchs who lived in this palace all tried to unite all the kingdoms present in the island into one. The remains of the royal city of Ambohimanga, nowadays, are classified as world cultural heritage by UNESCO. ANJOZOROBE
Anjozorobe is located in the northern part of Antananarivo, about 90 km from the city. Anjozorobe is home to a protected area known as “Angavo-Anjozorobe”. It covers 52.2 hectares of surface. In the park, one can find many species of orchids, medicinal plants, lemurs, birds, reptiles which are all native to Madagascar. It is an ideal place for bird watchers.

3) EAST
ANGAVOKELY’S FOREST
Angavokely is 30 km from Tana on the RN2. It takes about 30 minutes by car to get there. The forest station offers hikes to the top of the mesa, exploration of caves and different species of orchids.

4) WEST
ITASY’s LAKE –  AMPEFY
Ampefy is a typical small town on the shores of Lake Itasy. For those who prefer relaxation, rest, fresh air far from crowded beaches, they will discover this little haven of peace nestled in the Itasy region which offers many treasures of curious shapes.
Itasy is the third largest lake in Madagascar. It offers an excellent view of the Ilot Vierge. It is surrounded by many hills. West of the waterfall road and about a 45 minute drive away are some hot springs with spectacular mineral deposits. The lake draws its water from the Lily River with the beauty of its extraordinary waterfalls that have fascinated every tourist who has ever seen it. After the waterfall of Lake Itasy, the stay in Ampefy also allows you to enjoy the spectacle offered by the Geyser Analavory by hiking or mountain biking. This is located a few kilometers from Ampefy. It offers a rather striking spectacle with the many sources of a few meters high found there. Over time, the sparkling water, rich in minerals (sulphur and silica) gave rise to reds and copper colors, in the form of concretions. The geyser is a spring gushing into hot water and spraying steam.

The Ambohitantely special reserve is 140 km northwest of Antananarivo, in the district of Ankazobe. It covers the South – East rim of Ankazobe’s Tampoketsa. Ambohitantely is also a natural forest of 1,800 ha and a grassy savannah of 3,800 ha. This Special Reserve is the only protected area in the Analamanga region.
The lemur Eulemur fulvus and some endemic varieties of birds are the rare species of Ambohitantely. Of the 12 species of mammals recorded, three are Lemurs. These are Microcebus rufus and Avahi laniger, both nocturnal, and Eulemur fulvus, diurnal (cathemeral). The reserve also contains rodents and species of the genus Microgale.
Among birds, 48 ​​species are counted. Most are endemic to Madagascar but none are endemic to Ambohitantely. Two threatened species are listed, namely the Madagascar Harrier Circus macroscles, a species classified as vulnerable (VU) according to the IUCN, 2008, and the Lophotibis cristata or crested ibis of Madagascar. RS Ambohitantely is the only protected area that is home to the Madagascar harrier.
17 species of amphibians and as many reptiles as well as rodents complete the list of Ambohitantely.

Ambatolampy is 70 km south of Antananarivo.
There is a forest station, the Manjakatompo station which is an ecotourism site. Furthermore, there is also the Palace of Tsinjoarivo with its historical site and waterfall. You can see the third highest mountain in Madagascar called “Tsiafajavona”

The name of the city comes from the contraction of the Malagasy words “Any sira be” which simply means where there is a lot of salt. The salt in question comes from the presence of minerals in the waters of thermal springs which are numerous in Antsirabe.
This is a very pretty and very clean city, even the cleanest in all of Madagascar. It is traversed by wide and large avenues shaded and lined with jacaranda trees. During the flowering period, these colorful plants make the city even more charming; its purplish layers associated with variegated rickshaws, dominated above all by the bright orange color, give a very particular shot and an exceptional touch. Here, the air is almost pure, unlike in Antananarivo where exhaust gases are part of everyday life. In Antsirabe, the entire population has the privilege of getting around with non-motorized means of transport, rickshaws. Currently, this city has nearly 2000 rickshaws and it is even considered the Malagasy city that has the highest quantity of these two-wheeled means, ideal and more practical means to visit the city, with a low price. and maximum pleasure guaranteed. The advantage of these means of transport is that they are ready to serve you at any time of the day and that the shooters can even serve as your guide.
The city of Antsirabe is the city of waters because of the presence of its many mineral and thermal springs, its hot springs and Vichy water. They are seven in number, namely the two Ranomafana (I and II) which literally mean “hot water” in Malagasy, Ranovisy which is the Malagasy version of Vichy water, the Antsirakely of the hospital and the Sahatsiho. These sources have already been exploited for almost a century. One of the products from these sources is bottled and sold as “Visy gasy” which is highly valued due to its therapeutic virtue. The city is thus baptized “the Malagasy vichy”.
The lakes are not lacking either, we will mention the two known tourist lakes which make the wonders of Antsirabe, namely the lake of Andrikiba and the extraordinary mysterious Tritriva.