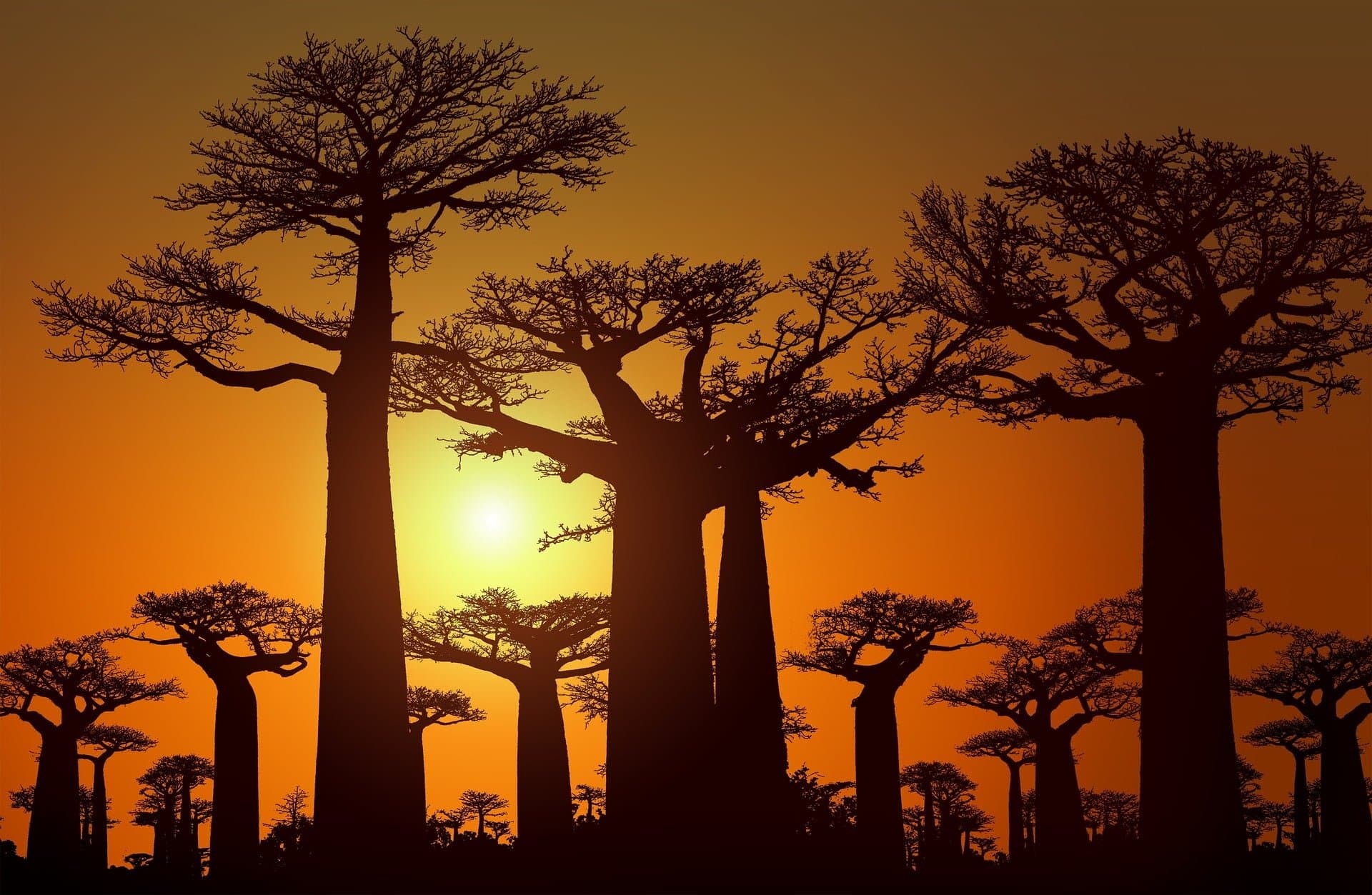 Miandrivazo is on the edge of Mahajilo, a river attached to Tsiribihina, 220 kilometers from Antsirabe, it is the starting point for the descent of this river. This city is the hottest in Madagascar (30°C at night from October to March, reaching 37°C or 38°C during the day), often cold in winter (June, July and August, particularly in the morning) .

THE DESCENT OF THE TSIRIBIHINA RIVER

Travel is becoming more and more popular. The descent of the river can only be organized by travel agencies or a very professional guide to avoid different forms of scams and accidents. It is a three to four day trip from the starting point in Miandrivazo. The view of birds on the river is excellent, and there is a good chance of seeing 5 species of Lemurs, chameleons and snakes. About 83 species of birds are encountered during the descent of the river. If you want to see the marvelous Tsingy de Bemaraha (eroded limestone), going down the river is the best way to do it, because driving from Morondava to Belo sur Tsiribihina would be a waste of time. During the descent of the river we can admire a primary forest, the canyon of Manambolo, the second day of the trip is the best part of the trip, passing in front of a beautiful landscape, a wonderful waterfall offering a moment of relaxation and relaxation if we feels a little tired.
It is the ideal place to learn the traditions and customs of the West Tribe passing through a few villages during the trip. The use of the motor boat is fast and less tiring, but quite expensive and noisy. Most tourists prefer the canoe rather than the boat. The descent of the river is one of the adventures, not to be missed if you visit Madagascar. Camping.

The Bemaraha National Park extends over 157,710 Ha with 100 km long from North to South and 10 to 40 km wide from East to West. Its southern part enjoys the status of National Park with an area of ​​72,340 ha. Its northern part, which has the status of Integral Natural Reserve, covers 85,370 ha. It is in the South that we find the Tsingy, spectacular pinnacles whose access is extremely difficult. This karstic formation extends as far as the eye can see, a forest of peaks and spur of rocks which gives an impressive whole.
Bemaraha is a high place of endemism and biological diversity. Scientists estimate that the general endemism of this park is 86.7% and the ecoregional endemism is 47%. Eleven species of lemurs are listed there, 5 families of bats, 103 species of birds. The repertoire of reptiles and amphibians is also wide, since Bemaraha has 34 species, all endemic. This is just a preview of your discoveries.
The Tsingy de Bemaraha National Park has vegetation as original as it is endemic. It has dense dry deciduous predominantly tropophilic forest – typical of the western ecoregion, interspersed with savannas in the east. Its vegetation is dry on the limestone slabs and wet in the canyons. 86% of the 650 plant species listed on Bemaraha are endemic. They have adapted to the arid climate. For some, the leaves have turned into thorns to retain water, this is the phenomenon of spinescence. For others, the trunks swell to store water; it is pachycaulia. Some plants dry out their vegetative apparatus and live in slow motion before the rainy season; it is revival. Finally, other plants have simply chosen to reduce their size and become dwarf shrubs. Smart, right?

Morondava was the center of the Sakalava kingdom of Menabe and their tombs. Morondava is located in the southwest of Madagascar, 700 kilometers from Antananarivo. Currently Morondava is the center of a promising sector, due to the introduction of ostrich farming in Madagascar. Tourists consider it as a place of good resource by the sea.
It is the region of the deciduous forests of the West, with the famous alley of baobabs and the Tsingy de Bemaraha National Park.

The reserve is home to 6 species of mainly nocturnal lemurs including the chirogale.
This is one of the only places where you can see the Madagascar jumping rat and one of the most likely places to see the fosa (especially in November, mating season).
There are also 45 species of birds, 32 varieties of reptiles and many species of tenrecs and mongooses.

The Kirindy special reserve is located 65 km north-east of Morondava by a bad road (allow 2 hours).

Apart from being the town at the end of the Tsiribihina river, Belo sur Tsiribihina has little to offer, but it is a nice little village for a break after the Tsingy or the descent of the river. It is worth spending a relaxing night here after the two trips which are truly an adventure tour. However, this city is also very rich in culture because every 4 years the fitampoha ceremony is held, a ceremony very typical of the Malagasy.

The Andranomena Special Reserve extends over 6,420 ha and is located in the Menabe Region, 30km north of the town of Morondava. The average temperature is around 25°C. The vegetation is a dense dry deciduous forest of the western domain with 3 remarkable species of baobab. It is home to a large number of local, regional and national endemic faunal species.
11 species of reptiles and one species of amphibian have been recorded in Andranomena. 48 species of birds, ten species of mammals and seven species of lemurs also live in the reserve. Among these lemurs, two species are diurnal and five are nocturnal. Three are classified by the International Union for Conservation of Nature (IUCN) as rare species and two as vulnerable species

Not to be confused with Belo sur Tsiribihina, this Vezo village is located 70 km south of Morondava. To appreciate it, you have to go there during the coolest time of the year (June and July) because it is very hot and even the small houses and huts are built on the edge of a small lagoon, under palms; Belo sur mer has a beautiful beach.

Morombe is located 250 km north of Tulear. The road is dusty and in bad condition, a journey of 250 kilometers takes about 22 hours. Morombe spoils those who have time to stroll. It is a prosperous little village, with a few spacious houses in the north and small wooden houses in the south. To the south, along the beach and beyond the “Baobab hotel” you can see a group of mangroves, and local tombs. The beach is beautiful in Morombe.

These two villages located 45 kilometers south of Morombe are close by one of the best beaches in Madagascar. If you come from the south of Morombe, you first reach Andavadoaka and then Ampasilava, a small charming village, 5 kilometers away. Getting there by car is amazing and takes about two hours.

THE INTEGRAL NATURAL RESERVE OF ANKARAFANTSIKA

Ankarafantsika is 450 km from Antananarivo and 114 km from Mahajanga. The National Road N°4 crosses the Park. Located in the Boina region, it straddles Marovoay and Ambato-Boeni. To the east of the park flows the Mahajamba river and the west, the Betsiboka. Ankarafantsika is spread over 135,000 ha.
Ankarafantsika is a haven of birds and lemurs, a particularity that makes conservation a real leitmotif for this national park. 8 species of lemurs have been observed in Ankarafantsika: a diurnal species, 2 mixed species, 5 typically nocturnal species including the famous Microcebus, the smallest primates in the world. 129 species of birds nest in the forest of Ankarafantsika. 75 of them are endemic. Finally, Ankarafansika is also home to local endemic reptiles: chameleons, iguanas, snakes and freshwater turtles.
The flora of Ankarafantsika is very diverse. There are 823 species there. 82% are endemic herbaceous plants and 92% for woody plants.
Camping

Mahajanga is on the northwest coast about 600 kilometers from Antananarivo. A warm but cool city with a large cosmopolitan population and interesting enough for a few days visit. A long boulevard borders the sea in the western part of the city and ends with a lighthouse, and right in the middle stands the Mahajanga baobab tree at least 700 years old and 14 meters in circumference.

About 12 kilometers from Mahajanga and 2 kilometers from the airport, it is a canyon basin of red, beige and lilac rock eroded into spikes, spirals and strange dunes. The canyon is sandy with bottoms filled with large chunks of lilac-colored clay. It is a very beautiful place, with its jet of fresh water, and idyllic for camping.

Katsepy is a small fishing village on the edge of the bay of Mahajanga which is 45 minutes from Mahajanga by ferry to cross the mouth. The only reason to go to Katsepy is to appreciate the landscape around the bay.

The Anjohibe cave is located 82 kilometers northeast of Mahajanga and only accessible by 4×4 vehicle, and during the dry season. There are two places to visit, the caves themselves and a natural pool, and above these caves is a waterfall. The cave is full of staladites and stalagmites (and bats), over 2 kilometers of underground passages. There is a colony of sifaka and some crocodiles in the shallow waters

Marojejy National Park is very mountainous, full of granite. It has a very sloppy clump with a high peak. Marojejy is made up of different types of vegetation: low altitiude, thick forest and high trees, tree ferns, palm trees, etc. You must be in good shape to climb the mountain, but the visit is highly rewarded. Marojejy is a very impressive park and has the ultimate wilderness feeling. You will encounter silky sifaka and helmeted vanga, panther chameleons, leaf tailed geckos, white legged brown lemurs, white headed vanga, iconic bird species. The Marojejy National Park covers an area of ​​60,050 Ha, in the Sava region, currently a redelimitation of this Protected Area is underway to reduce the area to 55,500 Ha. It is a park with altitudes that can reach 2132m. Marojejy is dominated by a huge mountain and very rugged forest landforms. It is a landscape of very complex shape where ridges and steep slopes follow one another. Marojejy conceals many interesting species: 115 species of birds, eleven species of lemurs. There are also 148 species of reptiles and amphibians, including 16 endemic to the great mountain. Marojejy alone contains 33% of the species of reptiles and amphibians known in Madagascar.

Anjajavy is located on the west coast of Madagascar. In Anjajavy, the sun is almost permanent, because it is an hour longer than normal, which adds your time to fully enjoy the sun. In all serenity, you can bask on the beaches where no one will disturb your well-being for miles around. Ideal place for a beautiful honeymoon, just with the total change of scenery, you really have the impression that time has stopped. The 45O hectare nature reserve is home to thousands of plant spaces for the most part, endemic and many medicinal plants. The Tsingy, famous thousand-year-old coral remains, dot the forest and overlook the bay. The famous Verreau’s dryopithecus (coquerelis Sifaka), the bird of paradise, the chameleon, Cuvier’s oplure (a kind of iguana) take refuge in the forest sheltering rosewoods and baobabs. We also see the Madagascar Eagle. Its coral reef gives a magic of shapes and colors to this still virgin world of silence. No road connects Anjajavy. A private plane from the Air Hotel Company serves the place which allows you to contemplate at low altitude the diversity of the landscape of the Red Island. A wide variety of aquatic plants, papyrus, ferns, trees, all kinds of climbing plants, palm trees where hummingbirds, lemurs, malachite kingfishers, Madagascar fondis or even the Rongo take refuge. The ballads are accessible to all and require no particular physical aptitude. There are marked trails starting from the Hotel for exploring the forest, surrounding coves and fishing villages. It is one of the most modern and cleanest beaches in Madagascar.